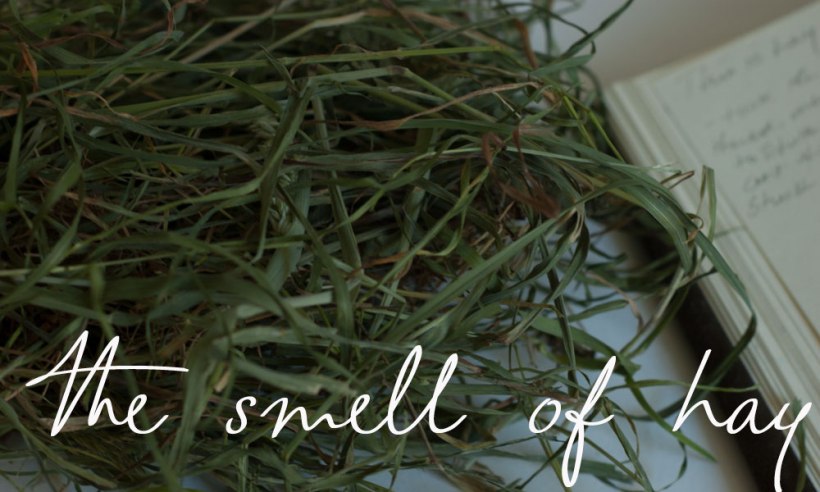 A few weeks ago I took the camera out to shoot hay being cut and gathered by hand – one of the rare moments of sunshine this summer – forgot I had the setting on shutter speed priority and so only got a couple decent shots so I decided to bring some home with me and shoot in the studio.

At any rate, within moments, as if hypnotised, I had my nose stuck in a pile of hay drying…ahhhh. I adore the smell of hay. Sweet, clover, pungent, warm, inviting, relaxing, summer.  It’s all of this and so much more!

I shut the door to eliminate sound, too much sensory stimulation, and to “block” the aroma in my mind.  My impression of hay:

But what is hay? What’s it made of? So off I went to Wiki and found that “…Hay is grass, legumes or other herbaceous plants that have been cut, dried, and stored for use as animal fodder, particularly for grazing livestock such as cattle, horses, goats, and sheep….Commonly used plants for hay include mixtures of grasses such as ryegrass (Lolium species), timothy, brome, fescue, Bermuda grass, orchard grass, and other species, depending on region. Hay may also include legumes, such as alfalfa (lucerne) and clovers (red, white and subterranean)….It is the leaf and seed material in the hay that determines its quality…..Hay is very sensitive to weather conditions, particularly when it is harvested.”

So the sweetness I smell is probably due to the clovers. Aha!  I’m guessing Flouve Absolute, being a grass, will have commonalities in odour with Hay Absolute.

Wide open spaces came to mind as one of the descriptors for hay and since I have the Dixie Chicks album by the same name I took it out and started listening to it and it got me thinking of myself, my own life, moving around all over the world to finally land here in the Alps where when standing at the peaks everything seems to stretch out to like forever. Freedom.

As I finish writing this it’s now evening and the scent of hay seems to be slowly filling the first floor (I’m not kidding). It’s a heavenly aroma that feels like its massaging my memories, coaxing them into easing their burdens. Wow. Scent can do all this and more. What a miracle it is…and I am humbled.