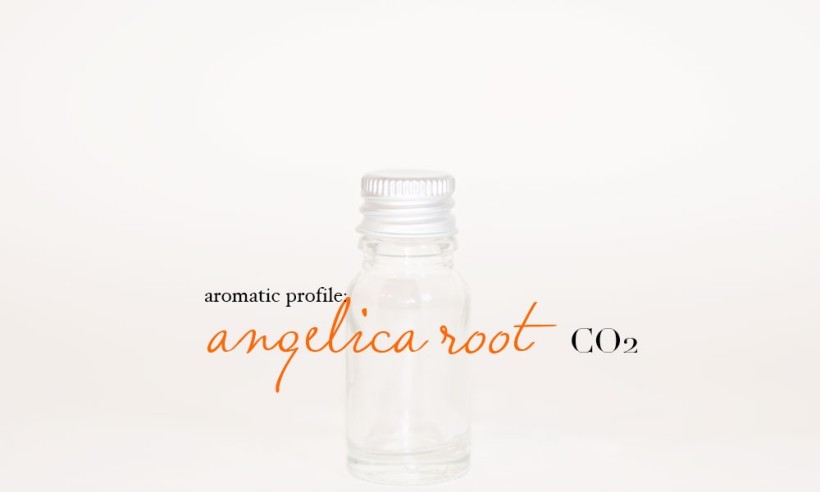 It always surprises me when I perform a profile, then days or weeks later sit to write about it only to find loads of references to an aspect in the material that I thought was wild, way out there and next to impossible to link it to. So it was with Angelica root CO2 and the lime aspect I picked up while profiling this beauty. I thought I was going crazy! How could that be? Lime in Angelica root, nah! But low and behold I found at least three online sources that referred to a lime note in there descriptions. Whenever this happens I find it strengthens my own personal olfactory confidence and that’s cool.

Interesting bits: The whole Angelica plant is aromatic, but only the root and seeds are used to make angelica root essential oil. (Gritman)

Angelica archangelica is a large, aromatic plant related to parsley and carrots. The essential oil is steam distilled from the rhizome. A rhizome is an underground stem-like structure from which above ground stems arise and roots descend. Angelica rhizomes contain up to 1% essential oil with a rich, peppery-sweet, musk-like aroma. Angelica root oil is highly synergistic so it’s valued in perfumery for its ability to impart distinctive nuances to a wide variety of perfume types from spicy florals to deep, woody masculine scents. (Aura Cacia)

Angelica archangelica grows wild in Finland, Sweden, Norway, Denmark, Greenland, the Faroe Islands, Iceland, mostly in the northern parts of the countries. It is cultivated in France, mainly in the Marais Poitevin, a marsh region close to Niort in the départment Deux-Sèvres. It also grows in certain regions in Germany like the Harz mountains, and in certain regions of Romania, like the Rodna Mountains, and some South East Asian countries like Thailand. (Wikipedia)

Their nose: Our Angelica Root CO2 select extract has a very fine, delicate aroma, yet it is extremely tenacious – a little goes a long way (Eden Botanicals)

My nose: The first 15min of Angelica root CO2opens soft, green, light, whimsical, pungent, dry and the projection is low. It’s a bit hard for me to describe at first; I really had to dig into my olfactory bank to find a match with those first few words. After 30min it smells akin to very dry paint, old paint when it’s dried like either on a wall or a paint brush. Do I smell lime? Could it be I get that impression or is it really that green lime aspect? 45min and it still smells like dry paint, but now more earthy, clean, clear, sharp, dry wood and somehow tenuous and feeble at the same time. How can naturals do that?! Be one thing and the other all at the same instant? 1hr now and the note remains green – not a wet, mossy, green but a dry, dusty green. It’s oddly rugged and jagged in texture. After 2hrs this Angelica root is still dry with a hint of sweetness, smooth, serene, always this hint of lime that is underscoring the whole. 3hrs later the green aspect is now sharp, dry and brittle even brisk, with a hint of something citrusy. Pleasant and still alive on the strip. The 7hr layer, which for me marks the heart of the base notes, is still dry, but sweetish, soft and pleasant with just a touch of a delicate, powdery quality. 12hrs later what was once a jagged, rugged texture is now grainy and weather-beaten, but the whole thing is a mere whisper now. 24hrs and what remains is a sweet, powdery, dry, lovely presence. It’s a bit warmer now but not by much. Angelica. I understand why it’s called this now.

12/24 comparison: The 12/24 comparison reveals a stronger, sharper, quality with bite in the 12hr strip. It has a lot of rough edges. The dry quality is much more apparent here than in the 24hr strip where the rough edge qualities have all been smoothed out, filed down, leaving only a cool, sweet, hush.

Angelica root is one of those materials that I never would have considered before profiling it but, now that I have, I can’t wait for a chance to use it in a few of my accords. I hope you liked exploring it with me.

Wishing you a wonder-filled rest of the week!