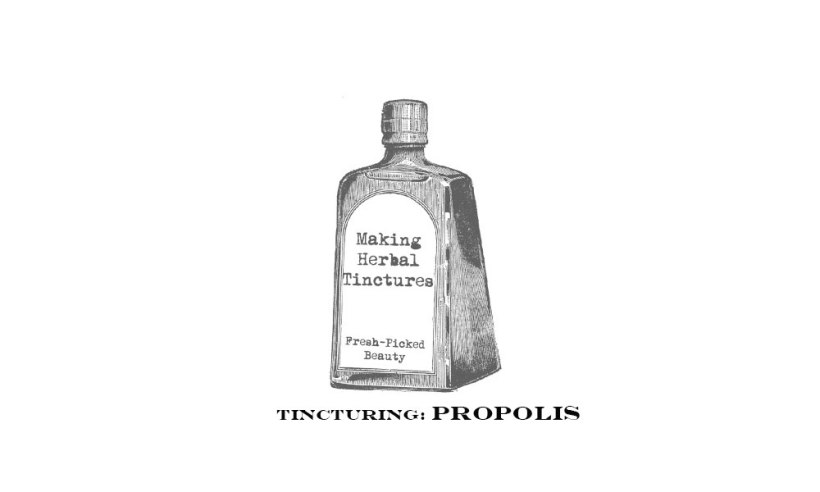 Today I’m doing a raw propolis tincture from our Alps here in Valtellina.  I went to visit Mirko of Miele di Valtellina to get the goods and thankfully he sells in small quantities!

First off I have to say my interest in propolis was piqued with a conversation I had with my French exchange partner from school, she gave me a really nice verbal description of her olfactive impression of propolis which led me to Francis Schofield’s site, she’s a Basenotes DIY forum member, and part of her site focuses on tinctures and in the forum she speaks quite a bit about the use of propolis in some blends.

Mirko is a young guy that has taken over the business from his father and is caring on the noble tradition of apiculture, God bless him, and he gave me the 411 on propolis, which I share here with you as well as a bit of research I did on my own to satisfy my own curiosity.

So what the heck is propolis anyway? The word “propolis” comes from the Greek “pro”, which can be translated as “in front of” and “polis”, the word for “city”. (World of Honey) According to Wikipedia, “‘Typical’ northern temperate propolis has approximately 50 constituents, primarily resins and vegetable balsams (50%), waxes (30%), essential oils (10%), and pollen (5%)”. Apparently, propolis is used by the bees as a hive sealer for small gaps to isolate their hives and to isolate, imprison and mummify any intruders like other insects or small animals that might be so daring to make it inside (good luck to them!).

I had no idea that bees need, actually they thrive, on an increase in ventilation during the winter months! So propolis isn’t about sealing themselves in for the winter, but Wikipedia says that Propolis is more about:

He told me that he lets his bees loose around the “bassa valle” or foothills of the alps not at high altitudes, making his raw propolis a mixture mainly of resin from Chestnut, Robinia and Tiglia (Linden) trees and of pollen and wax. This propolis from the alps is usually clearer than the propolis found growing along the plains.

So, here’s what I’m curious about: I wonder if propolis could have similar effects on a blend, on the whole composition? For example I’m curious to experiment and see if it could nullify or greatly reduce the odour strength of an ingredient or if it could reduce the stability or–okay I’m going out on a limb here, I know–reduce the intensity of a note?  We shall see.

Here’s a pic of what it looks like, pretty much like loose soil. I bought 90 grams of the raw stuff and I’m going to do a split: 45gr at 20% and 45gr at 30% to see if there are any noticeable olfactive differences. Mirko let’s his raw propolis tincture for about a month shaking it daily, as usual I’m just going to let mine sit for as long as I’m inspired, till I get the nudge to remove it and filter.